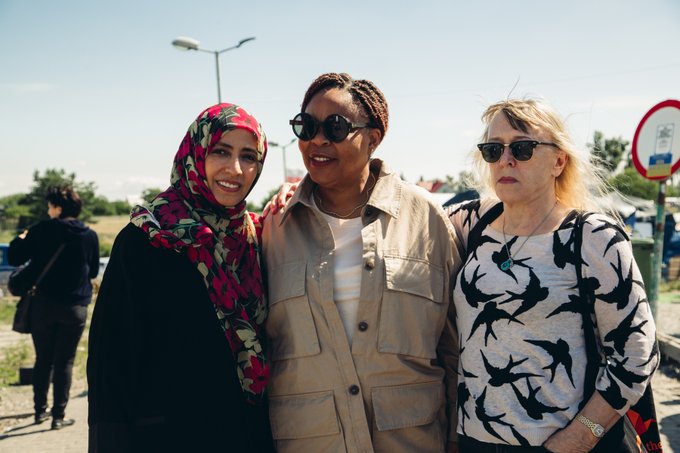 On June 22, day three of the delegation, the three laureates, partners, and delegates crossed the border into Ukraine and travelled to Lviv. There they met with women’s organizations, activists, displaced women, officials. They met with conductors at the Lviv train station who escorted refugees out of Ukraine, and internally displaced women at the Women’s Perspectives shelter. At the end of the day they used the pedestrian crossing at the border out of Ukraine to Poland, tracing the steps of the thousands of Ukrainians who have fled the violence. Partner organization United for Ukraine organized the logistics, meetings, and media for the delegation while the laureates were in the Ukraine.

The laureates spoke with two women conductors about their experiences transporting Ukrainians fleeing the conflict.  The Lviv Train Station has been a destination for millions fleeing the war from Eastern and Central Ukraine.

“My first train ride was on February 27th. It was difficult to leave my family as I realized it could be a one-way trip.” — Natalia Kuolrych, Lviv Train Conductor

“It was a difficult and moving experience to evacuate people from eastern Ukraine. I can’t forget one situation of a man seeing off his kids. He understood that they might not see each other again. He didn’t want to leave the car of the train even though the train was leaving the station.” — Natalia Kuolrych, Lviv Train Conductor

“It was very scary at first. But someone needs to do this work. So, we kept going.” – Natalia Kuolrych, Lviv Train Conductor

“I evacuated people east to Poland. You can’t imagine how crowded the trains were. If there were 54 seats in a compartment, 200 people were in that space.” – Nadia Zhinikovska, Lviv Train Conductor

“Thank you for telling us your stories. But they aren’t just stories, this is your lives. The work you do. And it’s not just your work. You are witnesses to humanity. You are the superwomen conductors of Lviv.” – Leymah Gbowee

The delegation then met with activists, women’s organizations and humanitarian organizations in Lviv, who travelled from around Ukraine to share their stories with the Nobel peace laureates.

“The women have experienced instances of sexual violence. This happens in Russian camps where there are no human rights organizations present. Women there are kept for a few hours, but we know of one woman who was held for three months.  It is necessary for international human rights organizations to monitor the situation.  This would be a powerful force against the violence that is taking place.” –– Maryna Pugachova, Director of Mariupol Women’s Association

“It is difficult to register the cases because, even if there is physical evidence, the women don’t want to talk about it…They are not prepared to admit the sexual violence. Not publicly. Not to their husbands. Not to themselves.” – Maryna Pugachova, Director of Mariupol Women’s Association

“I know what peace means to me. The full withdrawal of Russia from Ukrainian territory and accountability for war crimes. Without this we can never be sure that this situation will not be repeated.” – Maryna Pugachova, Director of Mariupol Women’s Association

“We give trainings to the legal community on how to work with survivors of violence… There are many challenges. The first challenge is one of accountability – actually recording instances of sexual violence and then having the legal framework to deal with it. We don’t have an article in the criminal code dealing with war and sexual violence. The criminal code refers to international acts, but not everyone is aware of this, so we do the trainings.” – Khrystyna Kit, Director of the Association of Women Lawyers of Ukraine

“We need to stop the war. Russia is the aggressor. They brought the war to our land. It is not Russian schools that are being destroyed. It is not Russian infrastructure… We did not start the war, but it is being fought on our land. Without this power analysis, we cannot achieve feminist peace.” – Oksana Potapova, Researcher and Activist

While in Lviv the laureates also had meetings with Governor Maksym Kozytskyy of the Lviv Regional Administration and Mayor Andriy Ivanovych Sadovyi of Lviv.

“We came to listen to Ukrainian women and to express our solidarity with Ukrainian people.” Tawakkol Karman

“The truth must go out there. The world must know what the internally displaced people are experiencing.” – Roman Andres, Director of Social Services

“We need to build a new ecosystem to deal with the results of this war. We need to understand the cost of rehabilitation and the need for rehabilitation facilities.” – Andriy Sadovyy, Mayor of the City of Lviv

“We are resilient. We will survive. We are unbroken.” – Andriy Sadovyy, Mayor of the City of Lviv